Cyberpunk 2077 is a future video game developed and released by CD Projekt, and will be released for Microsoft Windows, PlayStation 4, Xbox One and Google Stadia. Adapted from the board game Cyberpunk 2020, it is established fifty-seven years later in the dystopian city Night City, California.

It is an open world with six different districts, with a first-person perspective and players take on the role of the customizable character called V, who can improve their statistics with experience. V has an arsenal of weapons and melee options, which can be modified.

The video game is being developed by CD Projekt Red, an internal studio within CD Projekt, using the REDengine 4 game engine. They launched a new division at Wrocław and partnered with Digital Scapes to help with development. The staff exceeds the number who worked on The Witcher 3: Wild Hunt.

During the E3 of 2019, it was declared the official launch date of the videogame, in addition, it was revealed that the actor Keanu Reeves will be part of the cast of characters that will have relevance in the course of the game. These data were presented by the same actor in the presentation of the game in E3 who was the host of the event of the videogame.

Cyberpunk 2077 is a first-person action role-playing game in which players control V, a mercenary whose gender, hairstyles, face, body type, modifications and clothing are customizable.

V must consult a Ripper Doc to update and purchase cyberware implants in black markets for military skills. Colors, as usual in role-playing games, indicate the rarity of equipment, from unusual (green) to epic (purple). 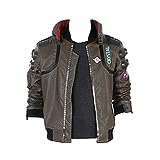 V is supposed to move very versatilely: walk normally on the floor, but also along the walls, take cover and aim. He can also jump, double jump and glide along the ground. If equipped with arm blades, V can climb walls, but also perform melee strikes like other melee weapons.

There are three types of ranged weapons:

These can be customized and modified. Ranged weapons are equipped to bounce projectiles towards the target (rebound shot) and slow them down (with a reflex amplifier) in Bullet Time. Four types of damage can be inflicted: Physical, thermal, electromagnetic, and chemical. Weaponsmiths repair and improve weapons.

V can move freely in the open world metropolis Night City. He walks and drives various vehicles, including motorcycles. The vehicles can be controlled from the first person as well as from the third person. Autonomous cars allow V to concentrate on the fight instead of driving while shooting. Pedestrians can be run over.

The game features non-English speaking characters. Players who do not speak the languages can buy translator implants to better understand them; depending on the advancement of the implants, the quality of the translations will vary, with more expensive implants offering more accurate translations.

There will be different endings based on the player’s agency and choice. Originally announced for release in multiplayer mode, CD Projekt later decided to focus on its aspects of single player mode. It will have a Photo Mode so that players can immortalize scenarios or specific situations of their characters.

Night City can be visited on foot and with a wide range of vehicles. Cyberpunk 2077 will show a great verticality. The video game will offer exploration at ground level and given that it is a city with many heights and buildings above our heads, CD Projekt RED has not missed the opportunity to present a vertical game and with much passion for heights.